Conquering Cancer, One Ride at a Time

Why Louis Bikes for Positive Change

For the last 12 years the Ride To Conquer Cancer (RTCC) benefiting the Princess Margaret Cancer Centre has been growing and creating an avenue for bike riders to fundraise and ride to support research and treatment to those suffering from cancer. Princess Margaret is one of the top five cancer research centres in the world! That’s something we are lucky to have in our own backyard, and something to be proud of.

We ride 220 kilometers over two days from Toronto to Niagara Falls. Day 1 is 105 kilometers from Toronto to Hamilton, and Day 2 is 115 kilometers to the finish line. It is a challenge, but we ride for those who can’t, and we push our limits because they pale in comparison to the limits being pushed by those fighting cancer.

How I Got Involved

For me, my exposure to The Ride started nine years ago when my father and brother decided to partake. I always made sure I was there at the finish line to support them and ensure there was a cold brew waiting for them. It wasn’t until two years ago that I decided to join.

At this point, my brother was no longer riding, but my father had been going for seven years straight, which was something I was very proud of him for doing. After his seventh ride, I told him I had registered for the 2018 RTCC at one of the tents that had been setup and, thus began my ride. In the summer of 2017 I purchased a pre-owned road bike and training began! 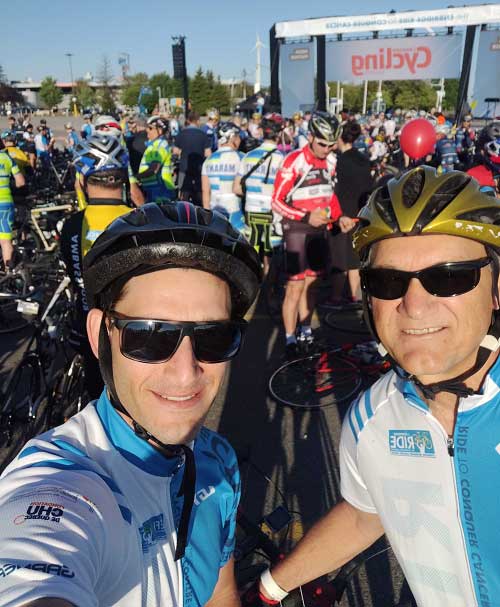 Louis participated in the Ride to Conquer Cancer with his Dad.

Why It’s Important To Me

Like so many others, my life has been impacted by cancer. I have several family members who have battled or are actively battling this awful disease. My father’s father, my Nonno, was taken from us by cancer. By the time they found it, it had spread so aggressively that there was nothing that could be done. It was the only time I’ve ever seen my father cry.

I know I’ve always hated this disease and until I decided to ride, my only real contribution were my donations to my father and brother. I was excited to become an active participant and do my own fundraising.

Fundraising for RTCC is no joke: a minimum of $2,500 is required to ride! The physical aspect of training became the least of my concerns. It is very difficult to get people to hand over their hard-earned money.

While fundraising for my first ride I was absolutely floored by the support I received in our Perk office. Within five days of announcing my plans to ride we had passed the 50 percent mark of the $2,500 goal! That number continued to rise and after reaching out to family and friends we easily surpassed the fundraising goal.

Year two did not disappoint either. The amazing group here at Perk came through again. We did a holiday bottle drive, and combined with monetary donations I was easily able to reach my goal and beat last year’s fundraising amount.

Through these rides and fundraising, I have also had the honour of hearing people’s stories from within the office about how they have been or were in the middle of being impacted by cancer in their families. We don’t just walk through these doors at Perk to perform our daily duties. We walk into a group of people who are willing to listen and support one another inside and outside these walls.

The Ride has raised over $213 million dollars since its inception 12 years ago! And this year there were over 4,500 riders that together raised $19.2 million dollars!

The number of lives impacted is a stat that can’t be measured. It reaches those that receive life-changing treatment, as well as their families, the riders and contributors, the event staff and volunteers, and now, hopefully, to anyone who reads this.

Thanks to the support from colleagues, our Perk family is helping do its part to help conquer cancer in our lifetime.

Louis is the Revenue Systems Manager at Perk Canada. He oversees most of the analytics and reporting processes that support daily and strategic operations. Louis spends most of his time outside of work with his family. He enjoys biking, all inclusive vacations, and binge watching TV shows.